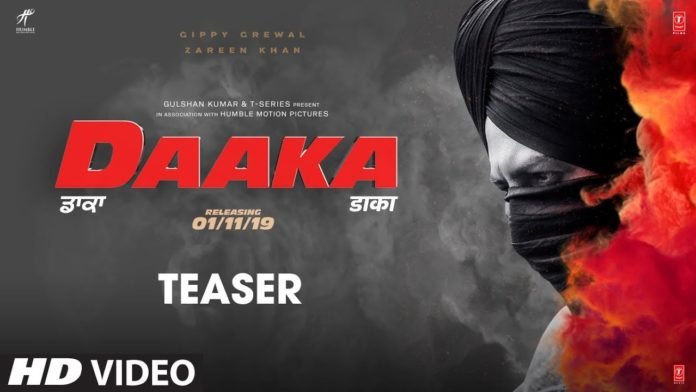 The movie earned a lot of fame in the year 2014. We all had loved the character of Punjabi Singer Gippy Grewal and Zareen Khan. I hope that they will also give their best in this Daaka Punjabi movie as well.

The movie releasing date of the Punjabi movie Daaka is 1 September 2019.

Grewal has shared his upcoming Punjabi movie poster on his Instagram handle. Here is a poster.

When he posted to his account this image he wrote – Kya kanoon ke haath Daaka tak pahoch payenge? Watch out for Daaka Teaser tomorrow!

The teaser is going to release tomorrow means on 29 August 2019. The Digital team has 3 months to promote this movie. We will see many advertisements on social media platforms to get people engaged with a movie.

As you have seen this poster now gets an idea of what’s the movie is all about. We can assume that the titled which has given to the movie is related to the mysterious. It could be similar to the Jatt James Bond movie.

Let me know in the comment box. What do you think about this movie was astonished in Punjabi Cinema?

The latest movie which Gippy Grewal has completed the movie name was Ardaas Karna. This movie is directed by Gippy. Ardaas Karna movie has made a tremendous record in New Zealand country. This is the first Punjabi movie who earned a lot of money and fame in New Zealand. We also want to see a similar movie Daaka Like.

As you have watched the teaser of the Daaka Gippy Grewal Movie. You have an idea about a movie. What would be the story of this movie?

These all names who participated to make this even better to any Punjabi movies. Without these people, a movie can’t be made properly. We should respect these people and their work as well.

Daaka Gippy Grewal Full movie is a huge budget. The movie is typed with one of Great T Series movies and song producer. Bhusan Kumar is also waiting for this a blockbuster. Daaka will be released on 11 November 2019.