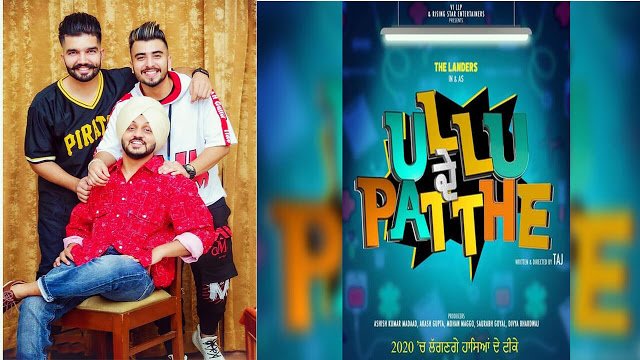 After entertaining the Punjabi audience with their songs, the trio of ‘Jail Fail’ famous singers The Landers – Sukh Kharoud, Guri Singh and Davey Singh are all set to make their acting debut. He will be seen as ‘Ullu De Patthe’, which will be  released in 2020.

Although not much has been told about the genre of the film, the title appears to be a comedy-drama.

Also, coming back to the movie details, written and directed by Taj, the film will be directed by Ashish Kumar Mawad, Akash Gupta, Mohan Maggo, Saurabh Goyal and Divya Bhardwaj.

The first song of The Landers Jail Fail makes their name in the industry. This was the song that people love the most. Now, taking it a step further, this trio will step into the film industry with the film Ulu De Patthe.

Upcoming Punjabi film Ullu De Patthe is being produced under the entertainment banner of VI LLP and Rising Star. The movie is a Punjabi director has written by Taj. Landers has shared the poster of his upcoming film on his Insta handle and quotes that something new and different will going to happen soon

They had just given us the hint only the Ulu De Patthe movie will be released in 2020. Even they haven’t confirmed the release date. The most interesting thing about this movie Devi, Guri &  Sukh will be seen the first time on screen. Landers excited about their debut role in Punjabi movie. We have listened to their song now we have to see how they perform in the movie.

Yes! Shooting for the ‘Ullu De Patthe’ has started this first week of September. Most of the people wonder what kind of title this is? Let us tell you about its Star Cast and after that, you can easily relate to this title. So, the main star cast of this movie is ‘The Landers’. You heard right! Landers are ready to enter the Punjabi film industry through this film. The three members of this team, Sukh Khraud, Guri Singh and Davey Singh are led. Now the question arises as to who will become the leading lady of the film?

According to our sources, we found out that there will be no actress in the lead role. Can you imagine a movie without an actress? This can only be possible in the Landers movie because we have always listened to their songs and their music and songs have some different flavors, maybe this kind of taste, we can put in ‘Ullu De Patthe’ movie.